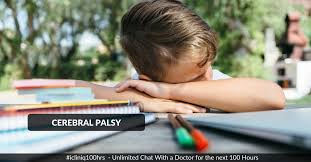 There are many different types of cerebral palsy, which is a neurological disorder that affects movement and coordination. Cerebral palsy in each person may present with its own set of symptoms. Some people are born with cerebral palsy, while others develop it later in life.

For every 1,000 babies born in the United States, around three will be diagnosed with some cerebral palsy by the time they are eight years old.

It is the most common type of cerebral palsy, affecting around 80 percent. Its primary cause is damage to the parts of the brain that control movement. It can happen during pregnancy due to infection or injury or soon after birth due to problems with oxygen supply to the brain.

Here’s how it happens:

The brain is the control center for the body. The Cerebral cortex is the area that controls muscle movement. The cerebral cortex sends messages through the motor neurons to the muscles telling them when to contract or relax.

There are three types of spastic cerebral palsy:

– Monoplegia: This is when only one limb is affected.

– Diplegia is when the arms are affected more than the legs, or vice versa.

The symptoms of spastic cerebral palsy include:

– problems with balance and coordination

– difficulty with fine motor skills such as writing or using cutlery.

People with this cerebral palsy often have trouble controlling their movements. It can cause problems with posture, walking, and speaking. They may also have involuntary movements (tics) and difficulty swallowing.

Here’s how this medical condition occurs:

Athetoid cerebral palsy occurs due to the damage to the parts of the brain that control muscle movement. It can happen anytime before, during, or after birth. The most common cause is a lack of oxygen to the brain during birth (birth asphyxia).

-Brain damage from an infection such as meningitis

-Bleeding in the brain

Symptoms usually appear before a child is 18 months old. The severity of symptoms can range from mild to severe. There is no cure for athetoid cerebral palsy, but treatments can help improve symptoms and quality of life.

When a child has ataxic cerebral palsy, they have difficulty with balance and coordination. This type of CP is the least common, making up about five percent of all CP cases. A child with ataxic CP might have a wide-based gait or unsteady arms and hands. They might also have trouble with precise movements, such as writing or using utensils.

Here are some reasons why this occurs:

The main reason is damage to the part of the brain that controls balance and coordination (the cerebellum).

It can be caused by:

-A bleed in the brain during pregnancy

-An infection in the mother during pregnancy

-Brain damage from a head injury after birth.

Here are some standard methods that doctors use to diagnose different types of cerebral palsy.

Medical history involves talking to you and your family about your health, including any pregnancy complications and the baby’s birth.

Physical exam: The doctor will check for muscle tightness, weakness, or paralysis signs. They will also look at how well the baby can move its arms and legs.

Imaging tests: These help doctors see how the brain functions and whether there are any abnormalities. Standard tests include magnetic resonance imaging (MRI), computed tomography (CT), and ultrasound.

Electrical studies: These test the electrical activity in the muscles and nerves to see if they are working correctly. Examples include electromyography (EMG) and nerve conduction velocity (NCV).

Lab tests are usually done if the doctor suspects a genetic disorder or infection.

Whether you are a caregiver of someone with CP or have been diagnosed yourself, know that you are not alone. There are plenty of treatments and therapies available to help lessen the symptoms of CP. With advances in medical technology, people with CP live longer lives than before.