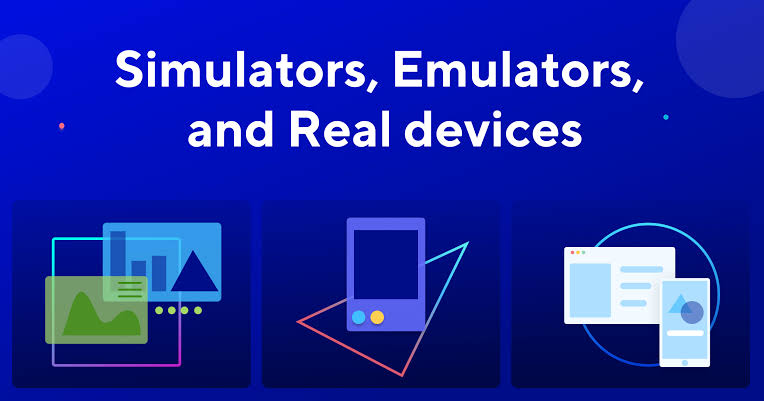 Testing software has been a crucial step in the development process for a long time. Mobile testing applications stand out as the area of software testing that needs the greatest attention. Testing a mobile app is no longer seen as testing a browser-based app that has yet to be scaled back. According to research, a mobile app would be preferred by about 52% of clients over a desktop. Android Emulators are Android Virtual Devices (AVDs) that represent specific Android devices. To test your Android applications on your PC, you can use an Android emulator. Emulators for Android are optional.

Any program must be compatible with the many generations of iOS and Android devices because the mobile market is growing quickly. To verify an application’s functionality, performance, usability, and consistency, mobile app testing involves running it through its paces on various virtual mobile app testing platforms. A mobile app’s non-functional components, real surroundings, and functionality are tested during the testing process.

What does the term “emulator” actually mean when testing mobile apps?

An Android smartphone simulator for your computer is called a mobile app emulator. Mobile app testing may be carried out more effectively because emulators make it simple to test mobile applications. This makes it possible to test Android application packages (.apk files) without using a physical device by using an online APK emulator.

When is it preferable to test using a simulator rather than an emulator?

What are emulators and simulators in the context of mobile testing?

An emulator is a virtual device that replicates the functionality of a real Android smartphone so that you may test your app on it when it comes to mobile testing. An emulator can replicate an operating system or hardware element of a device. A simulator is a digital representation of an iOS device like an iPhone or iPad used for mobile testing. These include iPhones and iPads, for instance. It enables you to test your application by simulating real-world device behavior while running on a Mac host.

Emulators create an operating system that functions and appears very much like the design of a mobile device. Many of the features found on an actual Android device are available in this environment, including the following:

Simulators are incredibly helpful tools for conducting quick and preliminary testing on iOS. They achieve this by creating an operating system that closely resembles the design and operation of a mobile device. But it’s crucial to understand the limitations they impose.

Simulators are useful for testing fundamental functions, but teams should refrain from using them to test physical objects, human motions, or user scenarios.

Let us now look at some advantages of virtual devices.

Virtual devices include emulators and simulators, for instance. Both of these technologies offer a variety of advantages for mobile testing applications, including the virtualization of mobile devices.

Various hardware setups and software platforms can be virtually replicated using emulators and simulators. Thanks to these capabilities, users can validate very quickly on a variety of platforms as well as in situations that call for specific device/operating system combinations. There are also some systems that, at this time, can only be supported (for testing and development reasons) using virtual devices.

Solutions for virtual devices cost far less than those for physical devices. Both locally hosted-and cloud-hosted solutions are subject to this. Teams must ramp up their testing efforts since testing must be driven from the start of the development process.

A large firm needs a lot of devices for the code to run on if each developer wants to do a series of validations before committing the code. Given that virtual devices will allow the organization to scale up and start executing earlier, it’s feasible that working against real devices will make little economic sense at this size.

You may always start with the same device state when using virtual devices. To achieve this, you should conduct a factory reset with authentic devices, which is time-consuming.

The fact that the virtual device always starts in the same place is advantageous. It typically improves the reliability of the automated test execution because there are no unexpected outcomes. According to the requirements of the tests, the apparatus is always ready to be used. For instance, a different user won’t be able to lock the device.

Here are some examples of use cases for mobile emulators as well as simulators.

Developers and testers install emulators and simulators on their local PCs to make the development process, application debugging, and local validations easier. Most widely used IDEs for native application development come with virtual device tools as part of the basic installation.

For virtual device labs today, testing utilizing continuous integration (CI) is the most popular. The growing use of DevOps and Agile development methodologies pushes teams to undertake more shift-left testing. Early-stage testing is another name for this kind of testing. Two new test automation frameworks that are assisting development teams in increasing their test automation coverage are Espresso and XCUITest. These frameworks are more suited to the knowledge and equipment employed by developers.

Having stated that, you will want an appropriate execution environment, sometimes known as a test cloud, to execute these tests. These automated tests can either be triggered by the continuous integration (CI) a few times per day, giving development teams rapid value on recent code changes, or they can run in the pre-commit phase, executing a collection of tests for quick validation before committing or merging code. The pre-commit and post-commit phases can be used to perform these tests.

How to evaluate mobile apps on real and model devices (emulators and simulators)?

One thing is regarded as self-expressive in the context of mobile testing. We must have access to a mobile device to conduct mobile testing. This is to inform you of how our application will act and function when it runs on a real device and how the user interface will seem when it does so.

Numerous issues are among the biggest challenges that mobile applications encounter. This essay will discuss a solution to the inability to access many devices simultaneously. The bulk of the time, one or more QA may need the same genuine device at the same time while conducting the testing. A tester will have to wait in these situations till the other QA has concluded their work. The testers will likely work around this problem by using emulators and simulators.

Although using emulated or simulated devices alone is not acceptable for human or automated application testing, genuine devices produce more accurate test results than emulated or simulated devices. Because they are too expensive, some startups and small and medium-sized enterprises (SMBs) may decide against using real devices to test the application. Instead, they might choose more practical, affordable, and user-friendly alternatives like an emulator or a simulator.

Choosing the most effective testing software for mobile applications

One of the most crucial steps in the life cycle of developing a mobile application is mobile app testing. As a result, it’s important to choose the right tool for the job at hand.

Two types of solutions are available for testing mobile applications using emulators and simulators: cloud-based and on-premise. Even though mobile device cloud testing solutions are getting increasingly popular because of their usability and scalability, many firms still prefer on-premise technologies. Several different technologies may be used to test mobile apps hosted in the cloud.

Popular cloud-based cross-browser testing platform LambdaTest offers both real device and virtual platform testing using emulators and simulators. The popularity of LambdaTest has grown significantly in recent years. The LambdaTest is among the most favored mobile app testing solutions for several reasons, including its seamless ability to conduct testing of mobile applications using emulators and simulators. Several additional factors make LambdaTest one of the best tools for testing mobile applications, including the following:

The files can be opened using LambdaTest’s user-friendly interface with only one click (.apk, app.zip). To accomplish your aim, you must first upload the file for the mobile application and then carry out a few simple steps.

With LambdaTest, tester can perform Cypress testing and Selenium automation testing. The platform also allows more than fifty different geographic locations to test on. The user merely needs to simulate the GPS position or IP geolocation while testing a mobile application, and the device will respond as expected.

With just a mouse click, you may see your dashboard’s alluring test execution velocity, productivity, and bug logs, thanks to LambdaTest. A thorough summary of issue logs and insights is helpful when creating the ideal app.

The formerly time-consuming process of mobile testing applications has been greatly simplified thanks to emulators and simulators. It necessitates that you be certain of the device brand, device type, and operating system you will be employing because these virtual platforms perfectly replicate the chosen device and produce precise output when executed on real devices.